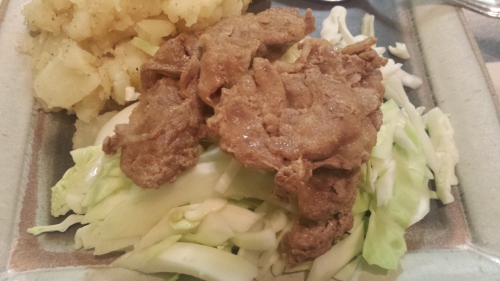 The name of this dish directly translated from the Japanese is more like Ginger Stir Fry, but shouga-yaki (しょうが焼き) is usually made with pork, so I tweaked the English translation.

I love this dish because its packed with flavor, but you only need to marinate the meat for 5-10 minutes. It takes me about 30 minutes to whip up this dinner if the pork is already thawed and cut, so it’s great for a busy night. This recipe also comes from Futari Gohan by Eiko Yanagisawa (I finally found out that there was furigana for her name in the back of the book, YAY!). She has several other cookbooks which I highly recommend checking out, but this happens to be my favorite. FYI, all her cookbooks are in Japanese, so don’t bother looking if you aren’t a Japanese speaker. And I digress… so back to the recipe!

2 tbsp Cooking Sake – You can buy this at the asian grocery. It’s called 料理酒 or 米酒. Usually there is English on the bottle.

1/2 tsp Grated Ginger – Or if you are lazy like me, a ping-pong ball sized chunk of ginger, half diced and half sliced.

Cabbage – Because no shouga-yaki is complete without a raw cabbage salad underneath.

Start by cutting up your ginger. I tried to take an image that would give you an idea of the size of my ginger “ping-pong ball”. It’s difficult to tell you exactly how much, so just base it on your preference. I love ginger, so I add more than necessary. I’m also too lazy to grate it, so as I said, you can dice half and slice half to get a strong enough flavor.

Mix the soy sauce, cooking sake, and ginger together in a bowl. You can see my diced and sliced bits of ginger floating around in there. 🙂

Next, put the meat in the mixture. Mine wasn’t exactly thawed, so I had some difficulty fitting it into the bowl until it did thaw.

Mix the meat and sauce well, then let it marinate for 5-10 minutes. If it marinates too long, it will get a bit salty, but I like to stick to 10 minutes as a rule of thumb. My meat finally thawed! Haha.

Heat a pan with about 1 tbsp of oil in it on medium high heat. Once heated, add the entire ginger-pork mixture to the pan. Thoroughly cook the pork, stirring/flipping the meat occasionally. It should take no more than 10 minutes. Don’t overcook the meat or it will get chewy; once all the pink is gone, it’s ready.

While the pork cooks, cut some raw cabbage into strips. Place this on a plate as the base and then layer the finished pork on top. The cabbage cuts the saltiness of the pork and is a healthy addition to this dish. Enjoy!