The next stop on my crock pot adventures was Jambalaya, again from the Cooking Light Slow Cooker to the Rescue edition.

This recipe, I must admit, I did not like nearly as much as the beef stew. To start, I didn’t add the hot sauce because I didn’t want my Jambalaya too spicy. Instead, I put in some cayenne pepper. It had a slight kick, but still seemed to lack something. I will have to experiment with this recipe and update you if I discover the missing ingredient. Regardless, it was tasty; and I do plan to make this again.

4 oz turkey kielbasa, halved and cut into 1/4 in thick slices

1 lb medium shrimp, peeled and deveined (I left this out because my fiance doesn’t like shrimp) 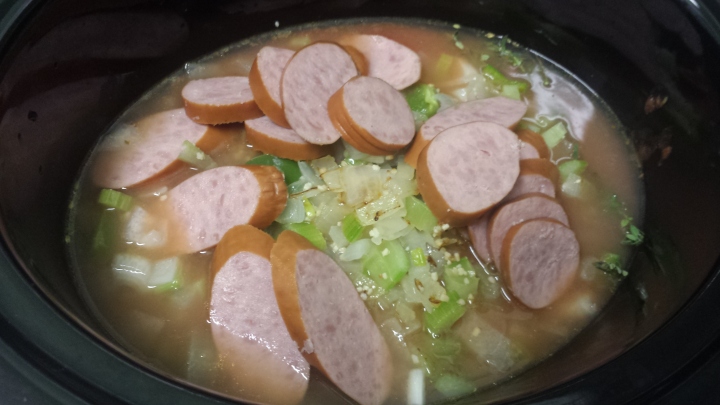 Cook rice in desired manner. As an ‘asian’ household, we have a rice cooker. Make sure you plan out the cooking of the rice to fit properly within your 5 hour window. I started cooking my rice at the 4 hour mark, since the rice cooker takes a solid 45 min – 1 hr. Once the rice is cooked, add the rice, shrimp, and chopped parsley to the slow cooker. Cover and cook on HIGH for 15 minutes or until the shrimp are done. Garnish with more parsley.

And that’s it! It’s a fairly easy recipe. As I said, despite being quite tasty, this dish was definitely lacking something. I think next time I try this, I will use some Korean red pepper flakes and even more paprika to add more depth to the spiciness. Layering flavors for spicy foods is relatively new to me; I’ve found that it’s a careful balance between the spice level and other flavors. One idea I have is to grill the chicken instead of sauteing it, to add a more smokey flavor.  Does anyone have recommendations?